The 420 GP6 at Warsash Sailing Club was a fantastic event. Light winds and a scenic backdrop greeted the 30 boats as they arrived at Warsash Sailing Club for the 420 GP event and qualifier. The class continues to grow in numbers; there were many new faces, as well as some new partnerships hitting the water - this event was full!

A big thanks must go to the Race Officer, Nigel Russell and his committee for their brilliant courses and swift turnarounds between races, especially as a result of the light shifty winds and famous tides made it tricky, also another big thanks must go to Alistair Beardsall and his safety and mark laying team team for doing a great job on the water.

Race 1 brought light winds from the north west and tricky spring tides making the tactics difficult to call weighing up between tide and pressure, however it became clear from race one it would be a 2 horse race with the pairing of Imogen Wade, Teddy Dunn and Harry George, Ralph Cawthorne showing exceptional speed in the light conditions took the event by a storm with them taking a 1st and 2nd respectively in the first race and Arwen Fleur and Peter cope taking 3rd. 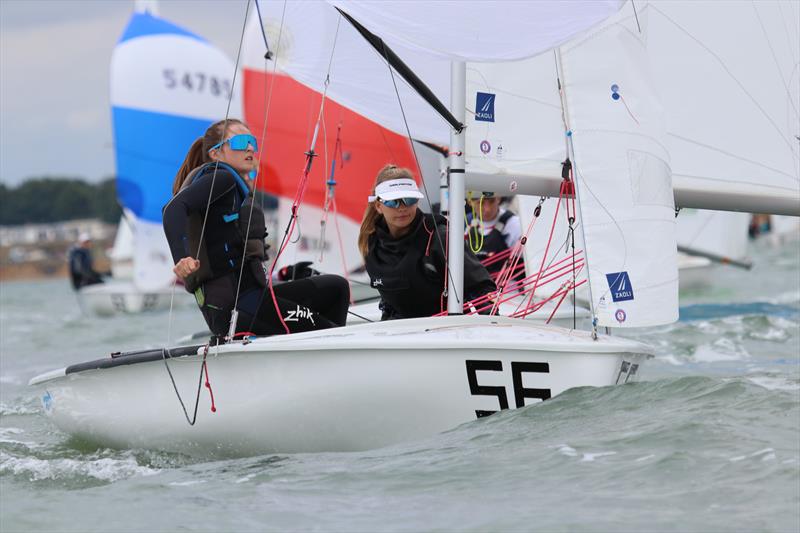 Race 2 saw more of the same with an increasing tide making it more important to get to the left side where the tide was travelling faster instead of looking for pressure, on the downwind however it was all about pressure as it would allow you to make better progress against the ripping tide. Harry and Ralph took 1st place and Imogen and Teddy taking 2nd clear of the chasing pack, and after a close battle between 3rd and 7th all within a couple of meters for the final reach Joe Warwicker and Hugo Valentine claiming 3rd.

Race 3 and what turned out to be the final race of the day with a tide that had gone slack and was starting to turn the other way meaning that the right hand side (closer to the shore) would start to become more and more favoured as the tide started to turn and strengthen. However after the start of race 3 pressure started filling in out to the left making it difficult to know wether to go for the pressure but risk being in stronger tide or going right to get out of the tide, by the top mark the leaders had come from the left side answering the question, this lead to Harry and Ralph taking their 2nd win of the day, Ellie Creighton and Bea Greenfield with a copy of the tides on the boat (tactical genius) taking second from Joe and Hugo 3rd. 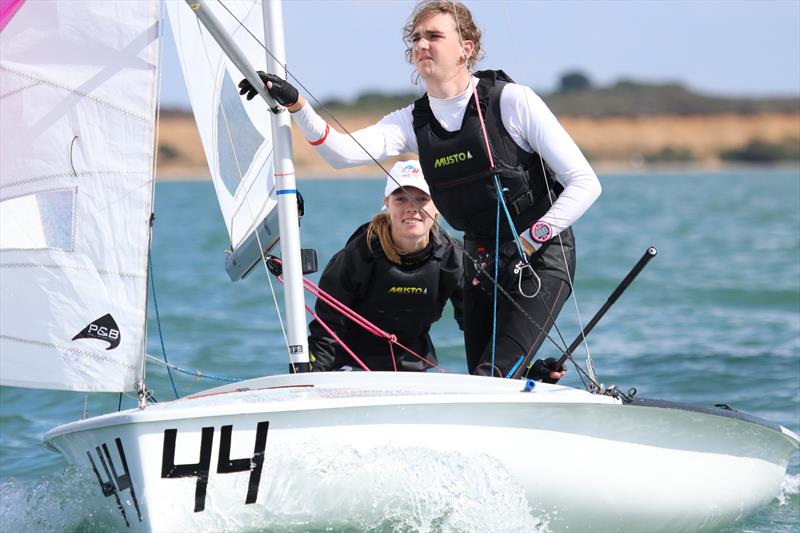 There had been 4 races scheduled for day 1 however shortly after the start of race 4 the wind switched off and with an increasing tide made reaching the top mark within the time limit impossible leading to the racing being abandoned for the day. This meant the overnight leaders were Harry and Ralph with an impressive 4 points close behind in 2nd was Imogen and Teddy on 8 points, followed closely by Joe and Hugo in 3rd on 12 points which set up great racing for the final day with it all to play for.

Day 2 the wind had shifted round to the south and was forecasted to be 5-9 knots in the morning and building to 9-12 in the afternoon and the tide was still very strong and would be coming in for the last 3 races.

Race 4 the wind was very unstable swinging 20 degrees from left to right but these shift were predictable as they usually came in from the side the pressure was on, the tide was relatively even across the sailing area, so it came down to the pressure and shifts as to who would come out on top the first beat the pressure favoured the right side with most of the top boats coming from there, the key to the downwind was again to be in the pressure as it would give you the biggest gain compared to tide and shifts. The second beat the wind swung left and filled in which meant Harry and Ralph would get to first by the windward mark which is where they would finish to get their 3rd race win of the regatta, followed by the new pairing Henry Heathcote and Oscar Cawthorne 2nd, Joe and Hugo finishing close behind in third. 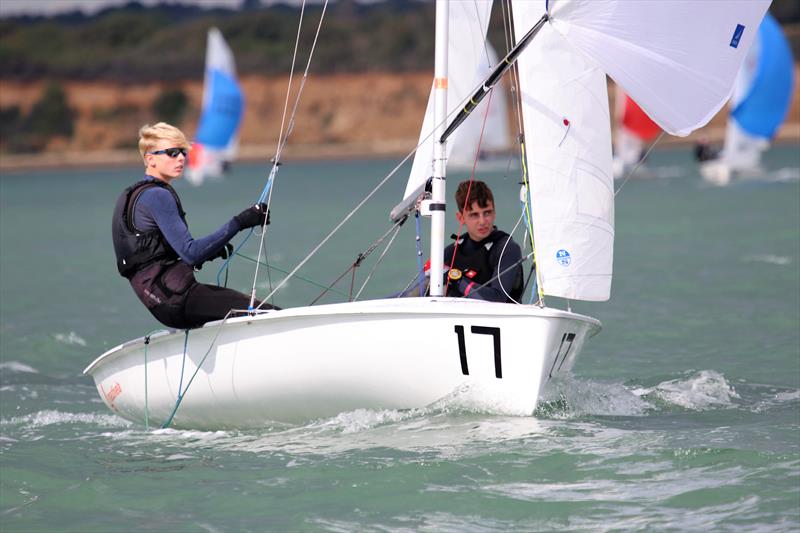 Race 5 the wind had built slightly with some of the lighter crews stretching their legs on the trapeze for the first time in the regatta, similarly to the first race it was all about the pressure and shifts with the wind following a similar pattern to race one with the wind initially being stronger on the right for the first upwind but then pressure shifting left on the second beat. The top 3 consisted of 2 new appearances with William Bailey and Mathew Rayner winning race 5, Teddy and Imogen finishing 2nd cementing their second place and with Harry and Ralph retiring from the race it was all to play for for the final race of the event, 3rd was Noa Moskovitch and Gabs Burlton which would help them in their fight with Ellie Creighton and Bea Greenfield to be first all-female boat.

Race 6 started with the battle for first place being battled between Harry and Ralph or Imogen and Teddy, the wind had strengthened further up to 8-10 knots and the tide had increased so playing the left side of the beat closer to shore in less tide led to success in the final race and after some great racing Imogen and Teddy did all they could to try take the event win by finishing first but fell short after Harry and Ralph put another great performance in to finish 2nd and take the event, with the new pairing of Olly Meadowcroft and Clara Jones 3rd. 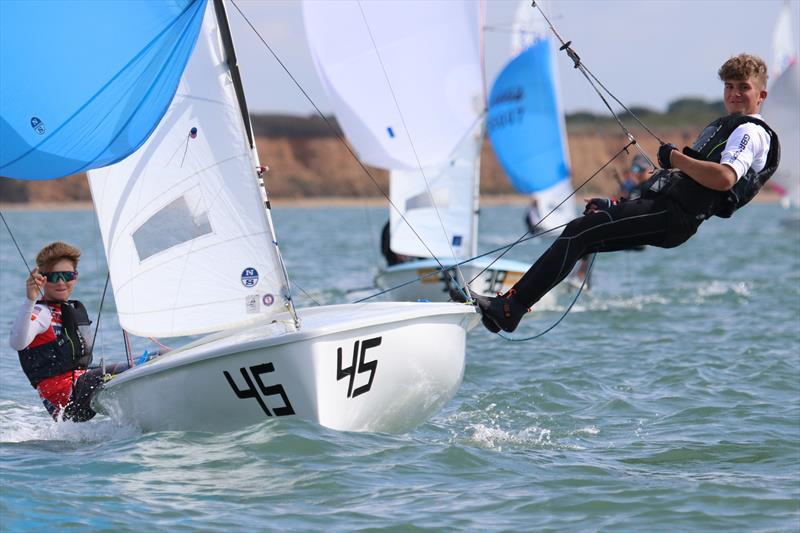 That concludes the 420 GP 6 at Warsash Sailing Club.

What a fantastic event many of the races saw the all 30 boats finishing within minutes. The racing was so close, and a thank you to everyone who was involved in making the event happen, and a big well done to Harry and Ralph who won the event after some brilliant sailing. Also it was good to see a lot of new faces within the class for the start of the next 420 calendar year and am looking forward to seeing them develop over the coming months.

There was one more final race in honour of Bart Simpson which takes place every year all over the country called the Bart's Bash we were and we were proud to be a part of it. The Race Officer put a short beat to a windward mark and a long downwind back to the sailing well done to Teddy and Imogen who won the race with Joe and Hugo 2nd, Harry and Ralph 3rd.